Our Lady of the Rosary Cemetery and Prayer Gardens in Georgetown, TX, was begun by a family of talented artists (Nick, and his son Nick, 21, and monument designer daughter Julia, 25) to revive the sacred arts in the cemetery. Having spent more than thirty summers in Mondsee, Austria, in the landhaus of Nick's father Philip Brumder, the family enjoyed perusing the cemeteries, studying the monuments and landscape design in the Salzkammergut.

When trying to adapt Nick's forged ironworks to cemeteries in the Austin, TX, area, the only way to accomplish this was to create a cemetery. Thus began a long and interesting journey of becoming cemeterians, gathering eleven fellow artists along the way to broaden the artistic scope of Our Lady of the Rosary Cemetery.

It has been a rewarding experience to see how touched people are to have a reverent and beautiful place to lay their loved ones to rest, and how important it is to those suffering a loss to be able to take care of the loved one's grave with flowers and gardening. Monthly Rosaries, frequent Masses and celebrations of the saints days and traditional observances such as All Souls Day, help keep fresh our hope of heaven and of a love that never dies.

Designing the monuments to capture the life and faith of those gone before us is part of the healing process, making the creation of sacred art and monuments the most fulfilling of artistic projects.

Willie Vela's monument shows the handcarved letters in Leuters Limestone by Archaic Stoneworks in Austin and June Doerr's Celtic Cross in bronze contain the favorite expression of fondness between Willie and his wife Estella Vela, "Always On My Mind."

Photo: The Vela monument reads "Always On My Mind," an expression of the Vela’s love for each other. The forged iron cross at right is a temporary marker until that family’s headstone is completed and in place. 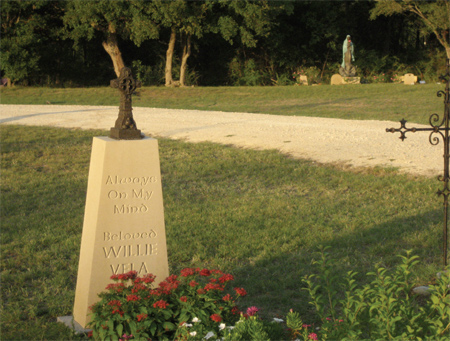 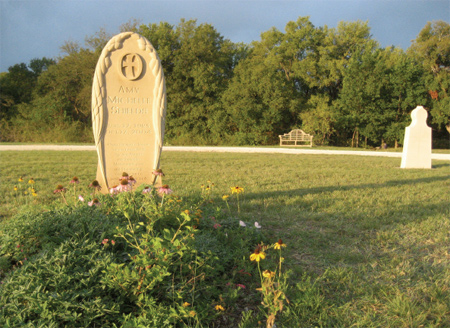 Amy Shields' Monument was carved by Holly Kincannon of Archaic Stoneworks. Amy was like an angel, thus the angel wings framing the monument. She wore the design of the cross on her ring, and gave the same sort of ring to her two brothers, Mike and Matt, who composed the poem to Amy on first learning of her death.

The pictures show how charming the spring flowers look around these monuments.

Photo: Amy Shields' Monument - "Our Hearts Have Been Touched By An Angel Here On Earth" is carved into the stone.

Nick Brumder's Celtic Cross is used as a temporary cross, and it is greatly comforting to families to have a piece of sacred art on the grave until a monument is chosen and finished, usually a four month process.

June Doerr created our Mother Teresa and most of the bronze pieces gracing our monuments—this being the Miraculous Medal.

Photo: This pre-need monument "The Miraculous Medal" was created by June Doerr. 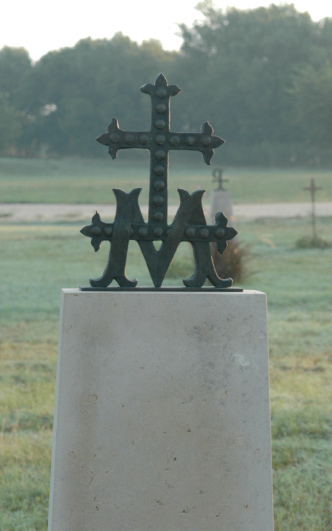 Nick Brumder forged the 20 foot Resurrection Cross as the central feature of Our Lady of the Rosary Cemetery and Prayer Gardens, with the help of his son Nick, and talented apprentice, Justin Smith. 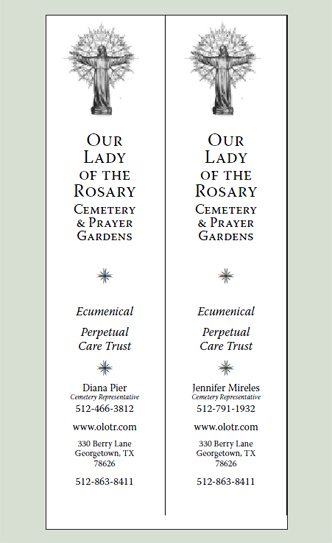 The Langowski Monument was created from a fondness of Faustyn Langowski for the temporary marker forged for his wife, LaJuana, on Thanksgiving Day, 2005, by Nick Brumder and son Nick. Granite work was by Killeen Monument Company.

The DeRiggi Monument was designed and carved by Archaic Stoneworks in Austin, and the mosaic was designed with the artistic clients, Marianne and Philip DeRiggi, and created by Father Jairo Lopez of Marble Falls, TX. Father Lopez has made many glorious mosaics for the cemetery. He trained in mosaics at the Vatican School of Mosaics in Ravenna, Italy.

We also have many monuments in white granite imported from China. The white granite is lovely and white is the liturgical color of the Resurrection. Many of these imported stones are embellished with bronze or mosaic pieces.

Ellen recently provided a copy of the Landscaping Tips joke submitted by Mark Lazaroski for the Celestial Comedy Corner that ran in Catholic Cemetery's January issue to public television's Central Texas Gardner. According to Ellen, they were so delighted that they booked her and Our Lady of the Rosary Cemetery for an upcoming landscaping feature. They filmed at her cemetery on April 3, 2007, and Ellen will be sure to let us know when her segment airs.

Ellen Brumder is director of Our Lady of the Rosary Cemetery